People are talking about insect genitalia more than ever before, because a paper was published with the title: “Female Penis, Male Vagina”. It was even mentioned on the Colbert Report:

This sensational anatomy belongs to four insect species in the genus Neutrogla that have recently been discovered in Brazilian bat caves. The sex of these insects are apparently reversed, the female has a penis and the male a vagina. The female penis is external genitalia called a gynosome while the male vagina is internal genitalia called a phallosome or genital chamber. The gynosomes of the four species differ in size, shape and whether they have spines. Correspondingly the phallosome shape is essentially an inverted gynosome with pouches instead of spines. To copulate (have sex) the female inserts her genitalia into the male in order to collect a spermatophore, sperm and nutrient package, which he produces. Once inside the male the female penis inflates, it’s spines anchor into him and they can remain in copulation for 40 to 70 hours. Females are promiscuous, mating as much as possible, while the males are choosy. Copulation is good for the female because she can get multiple nutritious presents while making the gift is costly for the male. The anchoring mechanism allows females to forcibly copulate with the males to get as many spermatophores as possible. The scientists who discovered these insects classify the female driven sexual selection and mating behavior as complete sex role reversal.

The genitals of these insects have made a huge impact because of their unique morphology and the opportunity to study the theories of sexual selection in new ways. However, not everyone is excited. The genital terminology used by the authors resulted in controversy over the use of gendered language and the sex bias in the study of genitalia.

As much attention as the female penis resulted in, it also created controversy. Some science writers embraced the term while others had problems with it. An interesting exchange on the use of “penis” occurred between Ed Young, part of the Nat Geo phenomenon blog  and Annalee Newitz on io9.Newitz wrote a critique of the original authors and subsequent news articles use of “penis”. Her main argument against the term is the potential for gendered language to promote sexist stereotypes. She suggests that using ‘female penis’ results in anthropomorphism relating genitalia to human ideas of gender and sexuality. Looking at the way popular articles talk about the female penis, her fears were justified. Language used to report the findings do perpetuate preconceived human centric ideas of gender performance in relationship to genitalia. This happens both overtly as in Stephen Colbert above, and subtly like in the title of a Nature news piece: “female insect uses spiky penis to take charge: Brazilian cave creatures’ marathon sex sessions extract nourishment along with sperm from reluctant male.” (Emphasis added). While these types of comments engage the public, they are not always harmless. They have the potential to bias future research with cultural expectation of behavior based on genitalia.

Ed Young added a response to Newitz’s comments to his blog. Although Young does concede that there is a potential for sex related terms to result in cultural and social bias, he voraciously defends the use of penis. He says the term ‘penis’ is a metaphor that helps us understand its role in reproduction, and that metaphor is frequently used in biology to describe a new anatomy. A definition of penis from Diane Kelly is “A reproductive structure that transfers gametes from one member of a mating pair to another” further supports the classification of the gynosome as a penis.

However, it is not clear that the discoverers of the female penis, Yoshizawa et al., would agree with Ed Young and Diane Kelly. While Yoshizawa et al. does not provide a clear definition of what a penis is, they do say the gynosome as the only female penis. Examples of female external genitalia that are ‘not’ penises include species of mites and beetles that have intromittent tubes that insert into the male and collect sperm. Also not a penis is the female seahorses ovipositor that deposits eggs into the male. Yoshizawa et al. says they gynophore anchors inside the female and that makes it a penis. But with that definition, not even all male external genitalia would qualify. By making the definition of penis so narrow Yoshizawa et al. are ignoring the possibility that other species are also sex reversed and limiting potential research questions. Comparisons between multiple insect species with penises or external genitalia could give us insight into how/why sex reversal evolved.

There is no clear resolution for what makes female external genitalia a penis and if we should use that term at all. As a metaphor for understanding which gender penetrates and transfers gametes “penis” can be useful. But already the usage of the term has become mired with gendered language and assumptions that may affect the way we interpret the insects’ behavior and population dynamics.

Another issue with how Yoshizawa et al. discusses sex organs is their reference to they typical internal female genitalia as ‘usually simple’. Even when the sexes are reversed the female penis is ‘highly elaborate’ and the male vagina is ‘simple’. Simple, even though the male vagina has evolved a corresponding, morphology to the female penis in terms of, size, curvature, and lateral pouches instead of spines. There is no clear explanation provided as to why reproductive organs that are mirror images of each other differ so much in perceived complexity. The way Yoshizawa et al. talk about the male vagina seems to be a reflection of a larger bias against the typically female internal genitalia.

There is a persistent bias against female genitalia in the science community. In a literature review, Ah-King et al. evaluated studies of genital evolution based on whether the article focused on a single sex or both sexes. They found that female genitalia were significantly understudied, and that in the past decade male bias in studies has only worsened. Although Yoshizawa et al.’s report of the sex reversed genitalia mention both the male and female, the focus is on the female penis and masculinization of the females. It appears that the fixation on external genitalia remains, even if the penis is on a female. The disregard for internal genitalia as simple could bias scientists from fully studying insect genitalia and understanding how it works and why it evolved. We should consider both the male vagina and female penis extraordinary. 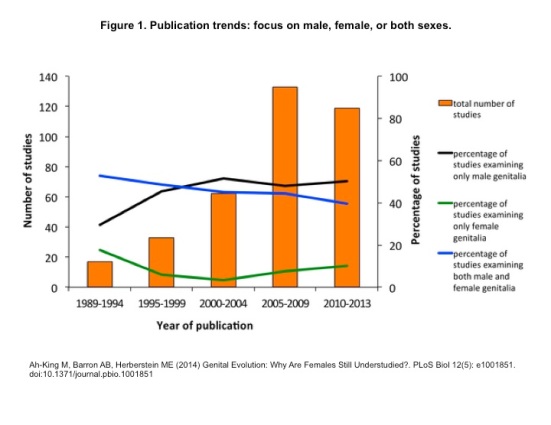 Time for a female genitalia renaissance

The necessity for the increased study of female genitalia is clear. As is the need to break out of the mindset that the, typically female, internal genitalia is simple. There are lots of examples of incredible female genitalia that deserve more recognition: Water striders have a genital shield, ducks can have elaborate corkscrew vaginas, and hyenas have pseudopenises! Hopefully, these two recent papers, on female penises in insects and on the failure of the scientific community to pay attention to female genitalia, will mark the onset of a sex balanced approach to the study of genital evolution.