Today, I’m going to write about everyone’s favorite kind of sperm: giant. Who makes giant sperm? It’s not who you might think. The giants of the animal kingdom–whales, elephants–make sperm that are very similar to that of men and mice. Tiny.

It’s the little guys who make the biggest sperm. In fact, as I’ve pointed out before, the largest sperm of all (and no, this is not relative to body size) are over 5cm long and made by a fruit fly called Drosophila bifurca.

But who else makes giant sperm? Well, it’s mainly arthropods, like the fruit fly, but also some flatworms and mollusks (maybe they’re compensating?), and some other unlikely suspects as well. For example: this tiny aquatic invertebrate known as Psuedocandona marchica, an animal without a Wikipedia page. These animals, which look like little aquatic blobs, belong to a class called the ostracods. Ostracods are a type of crustacean which are very tiny (0.1 to 30mm). But what they lack in size, they make up for in kinky sex lives.

Psuedocandona marchica (via bio.lmu.de). The outlined region is the ejaculatory organ, aka “Zenker” organ. It’s basically a canon that shoots giant sperm.

Ostracod females have two genital openings (gonopores) so they can receive sperm from both of the male’s penises–that’s right, the males each have 2 penises. The males of many ostracod species, including Psuedocandona marchica, make giant sperm (up to 10 times the length of the animal). As in the fruit fly D. bifurca, each sperm–tail and all–will entirely penetrate the egg and curl up inside.

While giant sperm obviously sound awesome, it’s not all sunshine and rainbows for the boys that have to produce and, it has to be said, deliver them. Giant sperm may have evolved as a way to outcompete other males–the bigger the sperm, the better they can displace sperm stored in the female from a previous mate. But the truth is, once they get to giant size, they lose a lot of the characteristics we associate with sperm. For one, they don’t really swim anymore. They kind of just get pushed along. For another, they aren’t mass produced. You can only divert so much of your resources to making sperm. Contrary to popular belief, there are other important things in life.

A giant sperm-maker, like the aquatic blob pictured above, also has to be able to push out that load of giant sperm somehow. And this was the subject of a paper published in June in the journal Naturwissenschaften. The paper explored the anatomy and function of what the authors refer to as a sperm pump (awesome name) or Zenker organ (awesomer).

At this point, I have to say that Scicurious over at Neurotic Physiology has already written an excellent post about the Zenker organ based on this paper, so I won’t try to repeat it. But you should seriously check it out. I will simply summarize the main points.

First, the Zenker organ wasn’t discovered in this paper, but the authors were able to discover how it works. The organ is, as Scicurious describes it, a sperm “cannon”: a tubular structure that can deliver dozens of sperm to a lucky lady blob in a single ejaculation. Remember, each sperm is over 10 times the length of the animal, when uncoiled. So this is a seriously massive load (so many puns intended). The structure is surrounded by muscles, which are held in place by spines protruding from the sclerotized (hardened) central tube through which sperm and seminal fluid will pass during copulation.

The Zenker organ pumps sperm through, one at a time, by the fluid pressure produced by muscle contractions. That’s how big these sperm are: they have to be shot out of the male one at a time. Acting as a valve, a “cogwheel-shaped ring” inside the entrance of the Zenker organ is opened up not by muscles, but by a combination of fluid pressure and a giant freaking sperm being pushed through. The valve prevents backflow, which is extremely important since it takes several pumps of the organ to get a single sperm all the way through and out to the penis. 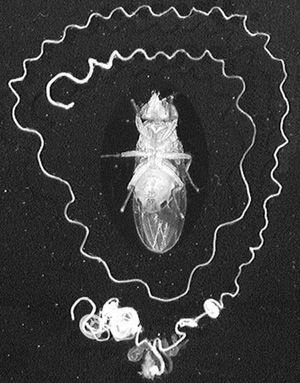 A male Drosophila bifurca surrounded by one of his own sperm. Image by Scott Pitnick.

Other giant sperm species have come up with their own anatomical novelties to deal with their enormous gametes.

The fruit fly Drosophila bifurca has to somehow transform giant bundles of many sperm into tightly coiled balls of individual sperm between the testes and seminal vesicles. Enter the sperm roller.

The sperm roller is a long, coiled structure between the testes and seminal vesicle. The roller is more than 1.2mm long and has up to 22 coils, according to Joly et al. as reported in The Journal of Structural Biology in March 2003. The authors conclude that the sperm roller is probably needed for packaging sperm. In D. bifurca, the giant sperm are stored in the seminal vesicle in individual sperm pellets which are neatly lined up, one behind the other, until ejaculation. However, this is difficult to prove because sperm are almost never found in the roller itself. Instead, you see big sperm bundles in the testes, and neatly packaged pellets in the seminal vesicles. The sperm have to travel through the sperm roller to get there, but exactly what goes on inside is still unclear.

So, what are giant sperm even for? No one has yet definitively answered that question, but I would argue that one function is to brighten my day. And hopefully yours, too.

2 thoughts on “Sperm are Cool #3: Giant sperm and the Zenker organ”