My lovely spider plant, trying to reproduce sexually and asexually. Make up your mind!

There are pros and cons to everything in life, and sex is no exception. From an evolutionary biology standpoint, sex is a compromise (which may explain why so many of our lawmakers seem to be against it).

Reproducing asexually means you don’t have to share with anyone else: all your genes get packed into each offspring and carried off into future generations. On the other hand, it’s the equivalent of putting all your eggs in one basket. If a disease comes along that your particular set of genes can’t fight against, all your offspring will be wiped out–the  “game over” of evolution.

So, sex is used to add variation into the gene sets of all your kids. You can’t pass on all your genes to every kid, but there’s less chance they’ll all be killed off by the same strain of the flu (See: Red Queen hypothesis).

Abstaining from sex in order to pump out clones of yourself also means your genes never get a chance to fix themselves if they suffer a damaging mutation. Genes are fixed by using someone else’s genes as a template. Over time, if enough mutations build up, your genes may simply cease to exist in the population because they just don’t work anymore (See: Muller’s Ratchet).

But some species seem to thrive without sex, gene mutations be damned. Like flatworms.

Flatworms, or Planaria, are most famous for their asexual reproduction. As this highly educational clip from some Japanese game show demonstrates, you can cut them up into little pieces, and each piece will regenerate a whole new worm!

But can they have sex?

Most worms that can regenerate like that have no need for sex. They don’t even have sexual organs. But over the years, scientists have reported sightings of sexual flatworms hanging out amongst the asexuals.

Researchers Kazuya Kobayashi and colleagues at Keio University in Tokyo and The Open University of Japan in Chiba recently reported their efforts to nail down what exactly is the relationship between asexuals and sexuals in one species of flatworm, Dugesia ryukyuensis. The article appears in the April 29 issue of Zoological Science. 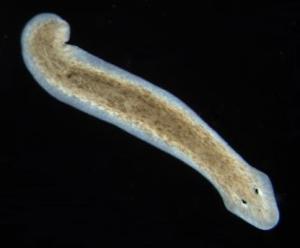 Previous research had discovered that you could turn these normally asexual worms into sexuals by feeding them the ground up carcasses of sexual worms from other species (Science!). After about 5 weeks of feeding, the worms became “acquired sexuals”. They had fully developed ovaries and testes, and could pump out fertilized eggs that would hatch into two types of baby worms: asexuals and “innate” sexuals. There were about twice as many asexuals as sexuals born from the “acquired” sexual parents.

The asexuals happily split in two to create new asexual worms, while the new sexual worms had to wait around for weeks to mature before they could start fertilizing eggs. This probably explains why they’re so rare in the wild–being sexual puts you at a serious disadvantage in baby-making. Which begs the question: could these sexually reproducing worms switch back to an asexual mode?

Nope. If you cut an “acquired” sexual worm in half, the bottom half (with all the sexytime parts) regenerates to become a sexual worm. But the top half (the head) regenerates an asexual worm. So, what about the “innate” sexuals–the ones that were born that way? If you cut them in half, you just get back two sexual worms. And unlike normal asexual worms, they’ll never spontaneously undergo fission. They only reproduce with sperm and eggs.

I wonder if these worms only ever become sexual in the wild after accidentally eating some of this mysterious sex juice from other species. Or is there some built-in mechanism to turn on sexual development, and people just happened to stumble on an artificial way to turn it on? If so, what might make an asexual worm turn sexual?

2 thoughts on “Sex or no sex, that is the question”