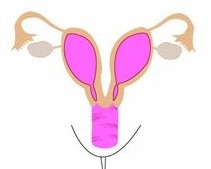 I just read this article on the Huffington Post website about a woman with two vaginas and two uteruses, an extremely rare condition known as uterus didelphys.

The condition usually isn’t discovered until puberty, when the girl starts having what I can only imagine are the worst periods of all time. However, there have been a couple of cases reported where the condition was discovered in young girls (one 5 months old, the other 4 years).

Pregnancy with uterus didelphys can be a problem if pregnancy occurs in both wombs, but there have been success stories. This article describes a woman who gave birth to twins, one from each uterus. And this case report tells the story of a woman who had twins in one uterus and a single fetus in the other–and all three were born via C-section without complications!